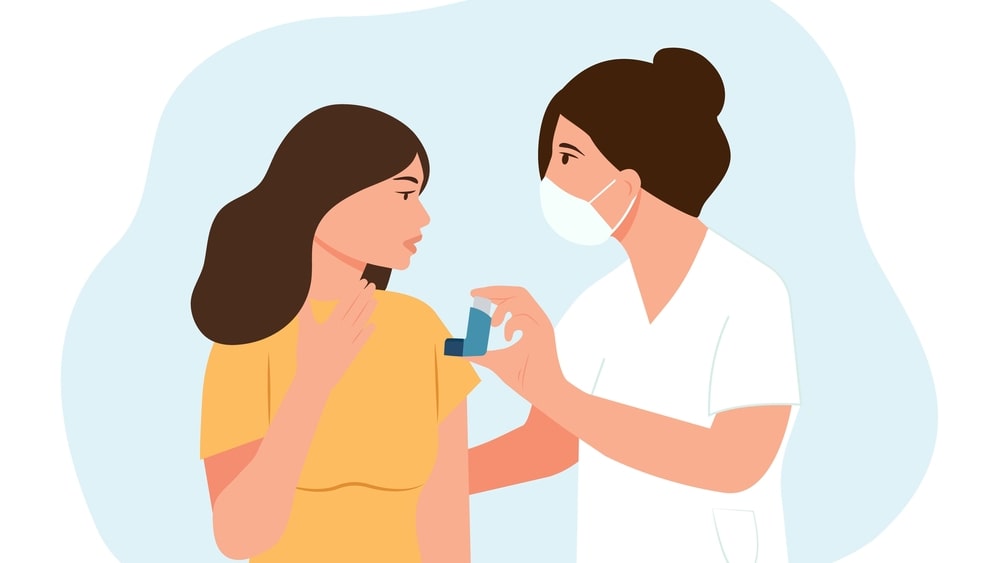 Asthma is a chronic inflammatory disorder of the airways associated with a variable (usually reversible) airflow obstruction and enhanced bronchial hyperresponsiveness to a variety of stimuli.

Asthma is characterized by the lungs’ extreme reactivity to numerous stimuli. There is mounting evidence that genetics plays a significant part in the disease’s etiology.

Environmental and genetic variables appear to interact to raise the risk of asthma. Viruses, allergies, and irritating gases and particles in the air are all examples of environmental triggers. Each person has a unique reaction to the elements that can cause asthma.

Physiological factors that may trigger or increase asthma symptoms include:

Common indoor environmental irritants and allergens that can trigger asthma symptoms or an asthma attack include:

The following are examples of common outdoor environmental irritants and allergens that can cause asthma symptoms or an asthma attack:

The immune system of the body reacts to proteins found in food, causing food allergies. These proteins are treated by the body as if they were a sickness. Different people react differently to different foods, though some have a higher risk of becoming a trigger.

Food allergies impact 2% to 10% of the population, with children accounting for the majority of the cases. Reactions might happen in a matter of minutes or over several hours. Severe episodes that go undiagnosed and untreated can be fatal.

Based on causes, asthma is divided into two types:

Asthma is currently classified based on clinical severity. Asthma patients and clinicians can better manage therapy options and clinical outcomes as a result of this.

Exacerbations can be mild or severe, although they normally last only a few hours to days. They don’t take daily prescriptions for long-term control; instead, they use only short-term medications for immediate comfort.

It’s marked by daytime symptoms that happen more than twice a week but less than once a day, as well as nighttime symptoms that happen more than twice a month. These people are asymptomatic, although their pulmonary function tests are abnormal. Exacerbations start to put a cap on how much they can do. For long-term control, they normally take one drug every day. When you use drugs for short-term relief on a daily basis, it means you need more long-term treatment.

It affects persons who experience daytime symptoms on a daily basis and nighttime symptoms more than once a week. Exacerbations are defined as periods of reduced activity that occur at least twice a week and can last several days. These people take one or two long-acting antidepressants. Daily use of medicines for rapid relief signals the need for extra long-term treatment.

It is marked by persistent daytime symptoms as well as frequent nighttime symptoms. They have little physical activity, and exacerbations are common. For long-term control, these folks frequently require two drugs per day. Daily use of medicines for rapid relief signals the need for extra long-term treatment.

Pollens, dust, mites, certain foods, and certain medicines are some of the frequent allergens that trigger asthma attacks. When allergens are exposed, they cause the creation of IgE, which then binds to mast cells. When exposed to the same allergen again, the allergens quickly attach to IgE, causing mast cell degranulation and the release of inflammatory mediators such as histamine, leukotrienes, and prostaglandins.

WBCs, migrate into the area to absorb the allergens in response to the above alterations. The phagocytic process results in the release of basic proteins, which function as tissue lytic agents and increase inflammation.

With exposure to a trigger, a cascade of cellular responses cause:

Asthma affects the airways, causing them to tighten, become inflamed, or fill with mucus. Asthma symptoms can range from mild to severe. Most people will only experience occasional symptoms, although a few people will have problems most of the time and including:

Exacerbations of asthma symptoms are a measure of a person’s asthma control. Early detection and correct diagnosis are required to rule out other diseases and reasons for breathing trouble in order to prevent the long-term effects of airway remodeling. Chronic obstructive lung illness, congestive heart failure, pulmonary embolisms, and mechanical obstruction are only a few examples (from tumors).

An asthma diagnosis is based on several factors, including a detailed medical history, a physical exam, symptoms, overall health, and test results.

The first step in diagnosing asthma is to look for signs of asthma or allergies. These signs include wheezing (high-pitched whistling sounds when breathing out) and a runny nose or swollen nasal passages, and allergic skin conditions (such as eczema).

Asthma and COPD (Chronic Obstructive Pulmonary Disease) causes problems by narrowing the bronchial tubes (or airways), resulting in shortness of breath. Narrowed airways are difficult to breathe through. The greater the narrowing, the more difficult breathing becomes.

It is a simple breathing test that is of great value for measuring exactly how much bronchial tubes have narrowed. The spirometer measures the amount (volume) and speed (flow) of air that can be inhaled and exhaled, giving an indication of how well the lungs are performing. It is often used to determine the amount of airway obstruction. This enables one to make decisions about lung conditions and to plan the best treatment for asthma.

Adults are more likely than children to get this lung function test for asthma. If symptoms and screening spirometry do not clearly or conclusively establish an asthma diagnosis, it may be used. Methacholine is a substance that, when inhaled, causes asthmatic airways to spasm (contract involuntarily) and narrow. A methacholine challenge test is a form of bronchoprovocation test that assesses lung function following exposure to substances that typically cause wheezing and other asthma symptoms.

The purpose of the Methacholine Challenge Test is:

It is a quick and easy way to measure inflammation (swelling) in the bronchial tubes of the lungs. During inflammation, higher than normal levels of nitric oxide (NO) are released from epithelial cells of the bronchial wall. The concentration of NO in exhaled breath, or fractional exhaled nitric oxide (FeNO), can help to identify airway inflammation, and thereby support a diagnosis of asthma when other objective evidence is lacking.

Allergy skin tests are vital in finding out whether asthma is due to inhalant allergens. Drops of a number of allergen extracts are placed on the skin (usually the forearm) and the skin is pricked lightly through the drops. A positive reaction will cause some itching and a bump at the site within 10 minutes.

A blood test for allergic antibodies to various allergens is an alternative but in some cases can be less likely to detect an allergy than skin tests.

Prevention of exposure to known triggers is warranted. Hyposensitization may be beneficial if asthma has an allergic mechanism, in such cases:

Drug therapy depends on the frequency and severity of attacks. The bronchodilators are often considered rescue inhalers, while the other medications are considered more prophylactic or therapeutic medications.

Methylxanthine Derivatives: The mechanism of action for methylxanthine derivatives is bronchodilation. The mechanisms of action include prostaglandin antagonism, stimulation of endogenous catecholamines, inhibition of calcium influx into smooth muscle (preventing muscle contraction), antagonism of adenosine receptors, and inhibition of release of mediators from leukocytes and mast cells. E.g. Theophylline.