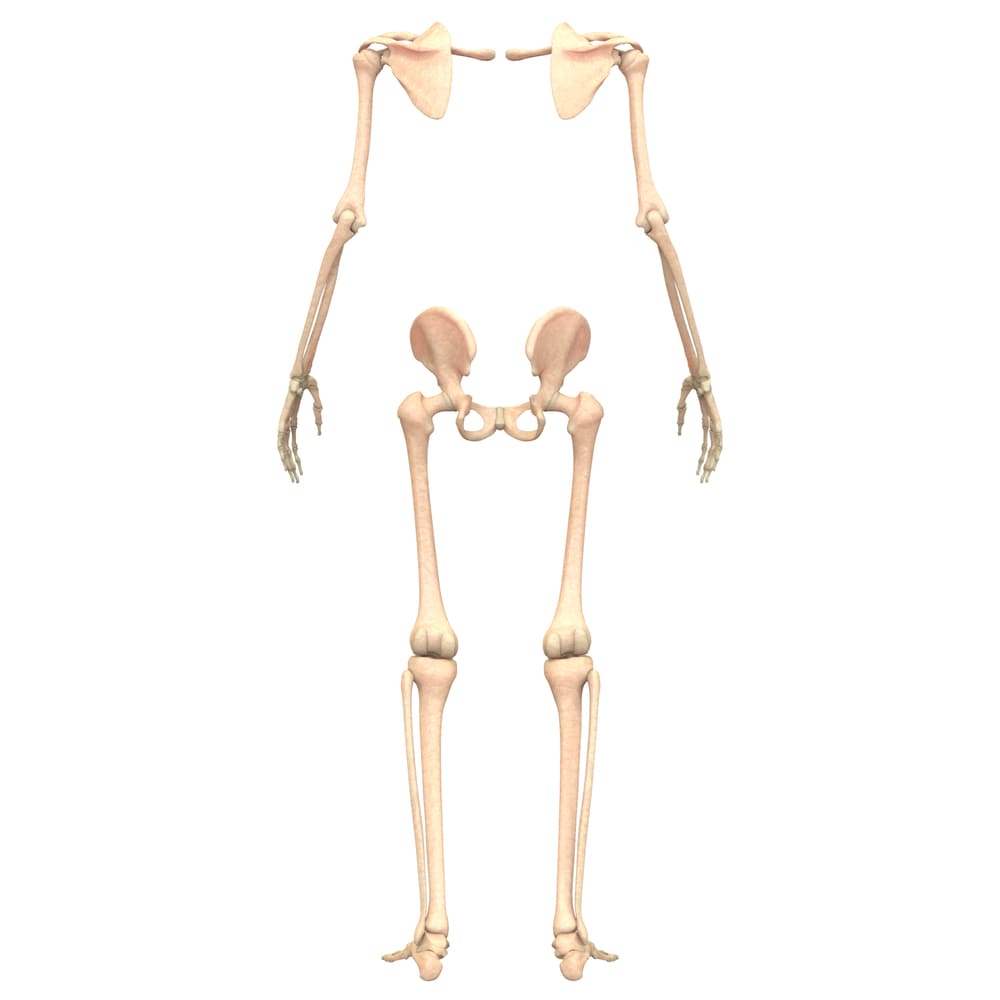 The clavicle is a long bone that is roughly S-shaped (Fig. 1.2 ). On one end it articulates with the manubrium of the sternum and on the other end, it forms a joint with the ‘acromion process’ of the scapula. This clavicle is the only bony link between the upper extremity and the axial skeleton. It lies close under the skin and is easily felt. It keeps the scapula in position.

A scapula or shoulder blade is a flat triangular bone lying on the posterior chest wall, superficial to the ribs (Fig. 1.3). It is held in place by muscles that attach it to the ribs and the vertebral column. It has three borders called medial, superior, and lateral and three angles named superior, inferior, and lateral. Superior and medial borders meet at a superior angle and lateral and medial borders meet at an inferior angle. The point at which superior and lateral borders meet at lateral angles represents a shallow articular surface called the glenoid cavity which together with the head of the humerus forms the shoulder joint. It has two processes, one of them is the coracoid process which projects forward from the superior border of the bone. The posterior surface of the scapula is divided by a spine.

The spinous process projects beyond the lateral angle as the acromion process and overhangs the shoulder joint. Both these processes give attachment to muscles and keep the head of the humerus in place preventing upward dislocation.

It is a long bone and is the largest in the upper limb (Fig.1.4). It consists of a proximal end or head, neck, shaft, and a distal end. The head is smooth and rounded and fits into the glenoid cavity of the scapula forming the shoulder joint. The neck is a slightly constricted part next to the head. Between the neck and the shaft, there are two tubercles called greater and lesser tubercles. These are divided by a deep groove that is occupied by one of the tendons of the biceps muscle. At the proximal end, the shaft is cylindrical but is flattened at its anterior and posterior surfaces towards the distal end. The distal end of the bone presents two articular surfaces, the capitulum and the trochlea (Fig. 1.4).

Immediately above the articular surface, the anterior side of the bone contains coronoid fossa and the posterior surface contains olecranon fossa (Fig. 1.4). The lower end of the bone also contains two condyles for articulation with the radius and ulna respectively. Above the condyles on either side are median and lateral epicondyles (Fig. 1.4).

Ulna and radius are the two bones of the forearm. There is an interosseous membrane between the bones.

This is a long bone consisting of the proximal end, shaft, and distal end or head (Fig. 1.5). It is located on the inner side of the forearm and is slightly bigger than the radius. The proximal end contains a semilunar notch called trochlear notch (Fig. 1.5), which articulates with the trochlea of the humerus. At its proximal end, there is the olecranon process which forms the point of an elbow and fits into the olecranon fossa of the humerus when the arm is straight. At its distal end of the trochlear notch lies the coronoid process which fits into the coronoid fossa of the humerus when the arm is bent. A smaller joint cavity, the radial notch, face outwards and forms a pivot joint with the head of the radius which rotates against it. This joint produces turning movements of a hand.

It is a long bone and is the outer bone of a forearm. It consists of head, neck, tuberosity, shaft, and distal extremity (Fig. 1.5). The head is disc-shaped and flat on the top and articulates with the capitulum of the humerus.

the shaft, there is a radial tuberosity which gives attachment to muscles. The shaft carries a sharp ridge facing the ulna. The distal end of the bone is expanded. It articulates with the carpal bones to form a wrist joint and with the ulna to form a radioulnar joint (Fig. 1.5). It also carries a styloid process which is felt at the base of the thumb. It gives attachment to ligaments and muscles.

The carpal bones are eight in number and are arranged in two rows each consisting of four bonds (Fig. 1.6). The bones are as follows:

The metacarpal bones or the bones of the hand are five in number and form a structure of the palm of a hand. Their upper extremities articulate with carpus and the lower extremities with phalanges.

Phalanges or bones of the fingers are fourteen in number and are so arranged that there are three in each finger and two in the thumb. The upper end of these bones is the largest and articulates with the corresponding metacarpal bone at one end and with the middle phalanges at the other end. The lower phalanges are the smallest and form tips of fingers.

The Pelvic Girdle and Lower Limb: Bones of the pelvic girdle are two innominate bones and one sacrum. The bones of the lower extremity are as follows:

Each of the innominate or the hip bones consists of three bones: ilium, ischium, and pubis, fused to form one large irregular bone (Fig. 1.7). On its outer surface, it has a deep depression called the acetabulum with which the head of the femur forms the hip joint. Ilium is the upper flattened part of the bone and contains the iliac crest (Fig. 1.7). The pubis is an anterior part of the bone and articulates with the pubis of the other hip bone at a cartilaginous joint called symphysis pubis. It also contains a large opening called obturator foramen (Fig. 1.7). The ischium is an inferior and posterior part of the bone which contains ischial tuberosity. The external surfaces of the innominate bones are markedly ridged for the attachment of muscles.

Pelvis (Fig. 1.8) is formed by innominate bones which articulate anteriorly with symphysis pubis and posteriorly with the sacrum. The two pubic bones join one another in the middle line. It is divided into greater or false pelvis above and the lesser or true pelvis below. The ridge of the bone (Fig. 1.8) called the brim of the pelvis is a separating line for these two parts.

The femur or thigh bone is the longest and strongest of all the bones of the body (Fig. 1.9). Proximal extremity consists of head, neck, and greater and lesser trochanters. The head is almost spherical and fits into the acetabulum of the hip bone. Two trochanters and intertrochanteric lines (Fig. 1.9) give attachment to muscles that move the hip joint.

The shaft of the bone is slightly convex anteriorly and is broader towards its distal end. The posterior surface forms a flat triangular area called the popliteal surface. Distal extremity presents two condyles that take part in the formation of a knee joint. Between the condyles, there is a depression called intercondylar fossa.

Tibia (Fig. 1.10) is a long bone running on the inner side of a leg. Its upper extremity is broad and thick and has two shallow condyles which receive the condyles of the femur, forming a knee joint. Between these condyles is the intercondylar eminence. On the front side, there is a tuberosity of the tibia which gives attachment to muscles. The lateral condyle has a facet that articulates with the head of the fibula. The shaft of the bone is roughly triangular and the surfaces are called medial, lateral, and posterior surfaces.

The crest of the tibia is a ridge that can be felt very close to the surface on the anterior aspect of the leg. The distal extremity of the tibia forms an ankle joint with a talus. Tibia carries a process that projects downwards forming the prominence on the inner side of the ankle joint called the medial malleolus.

Tarsal or ankle bones (Fig. 1.11) are seven in number and form the posterior part of the foot. The bones are one talus; one calcaneus; one navicular, three cuneiform, and one cuboid.

Talus articulates with tibia and fibula at the ankle joint. Calcaneus or heel bone is roughened for the attachment of muscles. Navicular is situated on the medial side of the foot distal to the talus (Fig. 1.11). The medial, intermediate, and lateral cuneiform and cuboid form a row of bones (Fig. 1.11) which articulate with the other three tarsal bones proximally and with the five metatarsal bones distally. The metatarsal bones are five in number. Their proximal ends articulate with the tarsal bones and the distal ends with phalanges. There are fourteen phalanges in each foot, two in the great toe and three each in other toes.

The arrangement of bones of a foot is such that it is not a rigid structure. The bones have a bridge-like arrangement and are supported by muscles and ligaments so that four arches such as medial longitudinal, lateral longitudinal, and two transverse arches are formed.