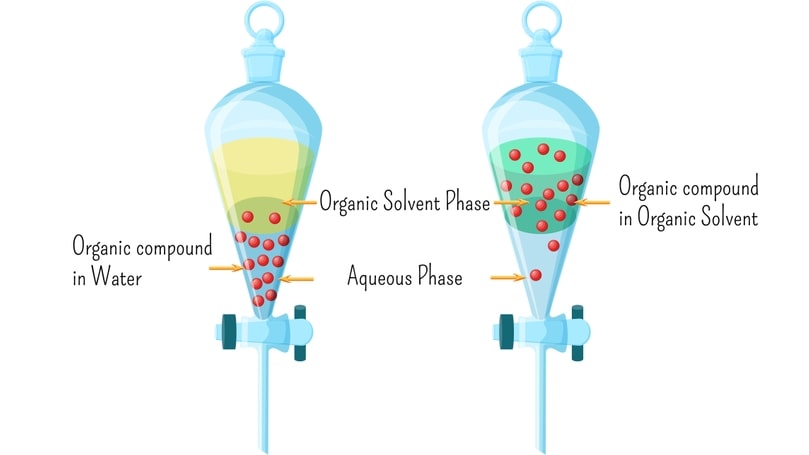 Distribution Law In pharmaceutical practice, often a single substance is dissolved in two immiscible phases’ i.e. two liquid phases in contacts that do not mix, such as chloroform and water. When an excess amount of solute is added to two immiscible liquid phases, it distributes itself between these phases until saturation, if mixed by shaking vigorously. If an insufficient amount of solute is added it distributes in a definite ratio. The term partition coefficient is commonly referred to as the equilibrium distribution of a single substance between two solvent phases separated by a boundary. If a third substance dissolves to some extent in both phases, the partition coefficient is the ratio of the amounts of the third substance dissolved in two phases. Partition coefficients are sometimes called distribution coefficients. The partition coefficient is a measure of drugs lipophilicity and is an indication of its ability to cross cell membranes. It is commonly determined using an oil phase of octanol or chloroform and water.

At a given temperature, the standard chemical potentials of solute in aqueous and organic phases are constant.

The ability of a drug to dissolve in a lipid phase when an aqueous phase is also present often referred to as lipophilicity can be best characterized by a partition coefficient. The true or intrinsic partition coefficient can be defined as the ratio of the unionized drug distributed between the organic and aqueous phases at equilibrium. It is expressed for unionizable molecules as

The partition coefficient is measured using low solute concentration, where K or Ko/w is a very weak function of solute concentration. Extensive data for the partitioning of drugs between octanol and water has been tabulated through the years, Table 1.1. Drugs having values of K much greater than 1 are classified as lipophilic whereas those with K smaller than 1 indicate a hydrophilic.

Applications of Distribution Law in Pharmacy