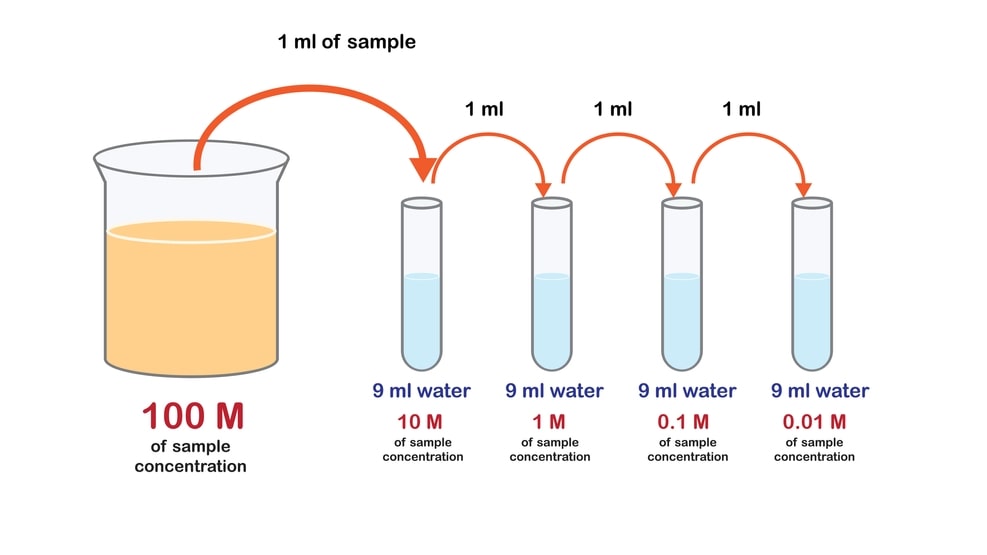 Techniques or methods used for the evaluation disinfection

This test is carried out in liquid media as well as in solid media. In liquid media, serial dilution is any dilution where the concentration decreases by the same quantity in each successive step. Hence, serial dilutions are multiplicative. In this method, the graded concentration of the test substance in a nutrient medium is inoculated with the test organism and incubated (Fig. 1.1). The medium concentration preventing detectable growth (MIC) is measured as bacteriostatic activity. MIC is defined as the lowest concentration of drugs or antibiotics that inhibit the growth of the test organism. MIC is mainly done for bacteriostatic activity.

In solid media, a suitable volume of double-strength nutrient agar is diluted with an equal volume of bacteriostatic solution and poured into a sterile Petri dish, and incubated at 37°C for drying. Then culture broth of test organisms is placed on the dried surface and incubated for 2-3 days (Fig. 1.2). This method is mainly used for solutions that give turbidity with fluid nutrient media.

This method depends on the diffusion of an antibiotic from a vertical-cavity through the solidified agar layer in a Petri plate. In this method, agar is melted, cooled, and then inoculated with the test organism and poured into a sterile Petri dish. In this method when the inoculated agar is solidified, holes about 8 mm in diameter are cut in the medium with a sterile cork borer. Using the proper buffer solutions, prepared solutions of known concentrations of the antibiotic are examined and poured into the cup of the agar plate and then incubated at 37°C for 24 hours. In this method, zones of inhibition may be observed, the diameter of the zones giving a rough indication of the relative activities of different antimicrobial substances. (Fig. 1.3). If the antibiotic has any anti-bacterial effect it will show a zone of inhibition.

In this method, the agar is poured into a Petri plate and then allowed to solidify. After that ditch cut out is made of agar. A solution of the antimicrobial substance or a mixture of this with agar is carefully run into the ditch at about three quarters fill it. A loopful of each test organism is then streaked outwards from the ditch on the agar surface. The drug is poured very carefully into the ditch. Various microorganisms are streaked on the sides of the ditch. The width of the zone of inhibition indicates antimicrobial activity. The method is used to find out the potency of the drug against various microorganisms by the means of inhibition of growth on the streaked area (Fig. 1.4).

In this method, two layers of agar are poured. The petri dish is kept in a slanting position and a sufficient amount of melted nutrient agar is poured and solidified in a slanting position. Another layer of agar is poured over it which contains the antibiotic solution and solidified it (Fig. 1.5). After solidification, the bacterial culture is spread over the solid surface and the plates are then incubated overnight at 37°C to allow diffusion of antimicrobial substance. The microorganisms will grow on the lower concentration of the drug. The antibiotics get diluted on the lower layer and a concentration gradient is produced. Finally, MIC is determined with the following formula given below. This method is used to isolate the resistant mutants.

This method is used to assess the effectiveness of the disinfectant against surfaces adhered to microorganisms. The test substance is contaminated with a standardized inoculum of the test bacteria and dried. Then a known volume of disinfectant solution is distributed over the carrier. After a certain time, the number of survivors is determined by the impression on the contact plate and the number of bacteria is determined. This method is used for the determination of the reduction rate of S. aureus. The disinfectant is applied to the carrier for the application time and thereafter the carrier continues to dry during the exposure. This test reflects in-use conditions like contact times, temperatures, use dilutions, and surface properties.

This test helps to prevent the emergence of resistant strains. The test was described by Maurer in 1985 that can be used in hospitals and laboratories to detect contamination of disinfections.

A viable cell is able to divide and form offspring. Viable count determines the number of cells in a sample capable of forming colonies on a suitable agar medium. Hence, the viable count is also known as plate count. Each viable cell can grow and divide to yield one colony. Hence, colony numbers are a reflection of cell numbers. It is done by two methods likely spread plate method and the pour plate method. The main advantages are, the method is very sensitive and one can count subsets of the population. Some disadvantages are, colony-forming units may underestimate cell numbers because of chains of cells, and also it requires at least a few hours or overnight for incubation.

The ability to retain activity in the presence of an increasing contamination load is the capacity of the disinfectant. In a capacity test, the disinfectant is challenged repeatedly by successive additions of bacterial suspension until its capacity to kill has been exhausted. Capacity tests simulate the practical situations of housekeeping and instrument disinfection. This capacity test is known as the Kelsey-Sykes test.

It is a triple challenge test to determine concentrations of disinfectant that will be effective in clean and dirty conditions. The disinfectant is challenged by three successive additions of a bacterial suspension during the course of the test. The duration of the test is for 30 minutes. The concentration of the disinfectant is reduced by half by the addition of autoclaved yeast cells, which builds up to a final concentration of 0.5%. Four organisms are used namely S. aureus, E. coli, P. aeruginosa, and Proteus Vulgaris based on the type of disinfectant. The method can be carried out under ‘clean’ or ‘dirty’ conditions. The dilutions of the disinfectant are made in hard water (10% w/v of MgSO4, 7H2O) for clean conditions and in yeast suspension for dirty conditions. Test organism alone or with yeast is added at 0, 10, and 20 minutes intervals. The contact time of disinfectant and test organism is 8 minutes. The three sets of five replicate cultures are prepared and incubated at 37°C for 48 hours and growth is assessed by turbidity (Fig. 1.6). The disinfectant is evaluated on its ability to kill microorganisms or its absence of it and the result is reported qualitatively as a pass or a fail. Sets that contain two or more negative cultures are recorded as a negative results. Further, the dilution tested if negative results are obtained after the first and second challenges then the disinfectant is passed. The third challenge is not included in the pass/fail criterion but positive cultures serve as inbuilt controls. If there are no positive cultures after the third challenge, a lower concentration of the disinfectant further is tested (Table 1.1).