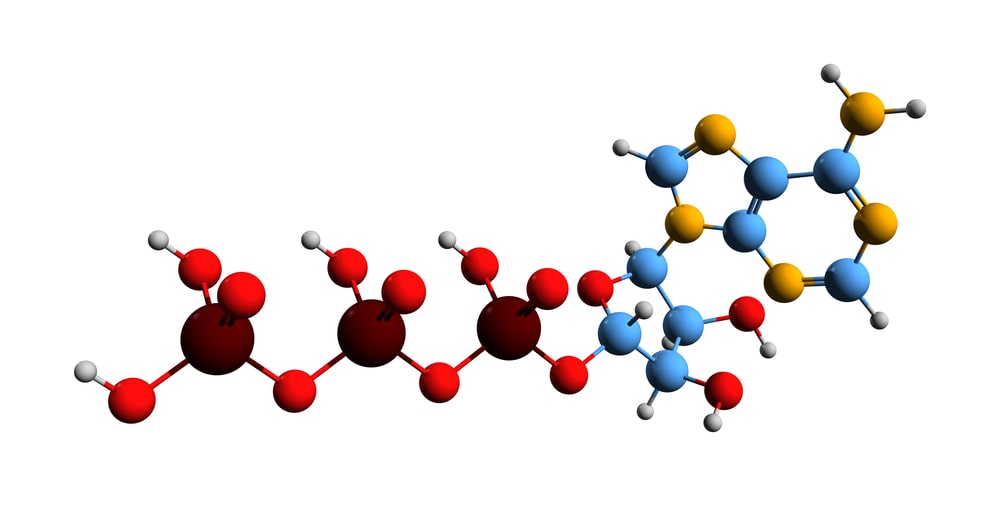 Adenosine triphosphate (ATP) is a small molecule present in cells. It acts as a coenzyme and is a unit for the transfer of metabolic energy. It transports chemical energy within cells. It carries energy to the place wherever needed. Most cellular functions need energy in order to carry out the synthesis of proteins, synthesis of membranes, movement of the cell, cellular division, transport of various solutes, etc. When ATP is hydrolyzed to ADP (adenosine diphosphate) and inorganic phosphate, the breakdown of the covalent link of phosphate liberates energy which is used for metabolic activities. Formation and Role of ATP. The structure of ATP is indicated in Fig. 1.1.

There are three major mechanisms involved in the biosynthesis of ATP

They are as follows

The first two processes are common in the metabolism of animals including human beings. Metabolic processes which use ATP as an energy source to convert it back to ADP and AMP. The human body contains about 250 grams of ATP, which is turned over each day during metabolism.

ATP is used as a substrate in signal transduction pathways by kinases which phosphorylate proteins and lipids. It is also used by an enzyme adenylate cyclase, which uses ATP to produce cyclic AMP (CAMP). The molecules which are secreted to carry out the function of messaging are termed as second messengers. CAMP is a second messenger. Apart from its roles in signaling and energy metabolism, ATP is also incorporated into nucleic acids by polymerases in the process of transcription. ATP is believed to be a neurotransmitter.

In the structure of ATP, three phosphate groups are attached to 5 – a carbon atom of the pentose sugar. The pentose is ribose in the case of RNA and deoxyribose in the case of DNA. It is the addition and removal of these phosphate groups which convert ATP, ADP, and AMP. It was first artificially synthesized in the laboratory in the year 1948. ATP is highly soluble in water and is stable between pH of 6.8-7.4. It is rapidly hydrolyzed by extremes of pH.

The standard amount of energy released from the hydrolysis of ATP is as follows:

ATP has several negatively charged groups in neutral solution. Hence, it chelates with metals with very high affinity. In cells, ATP mostly exists as a complex with Mg++

ATP functions in the cell

ATP is consumed in the cell by energy-requiring (endergonic) processes and can be generated by energy-releasing (exergonic) processes. Thus, it transfers energy between various metabolic reactions. It is the main energy source for the majority of cellular reactions. This includes the synthesis of DNA, RNA, and proteins. It also plays an important role in the transport of macromolecules across cell membranes e.g. exocytosis and endocytosis.

Roles in Cell Structure and Locomotion

It is critically involved in maintaining cell structure by facilitating assembly and disassembly of the components of the cytoskeleton. It is also required for the contraction of actin and myosin which are proteins present in the muscle fibers. This process is one of the main energy requirements of animals and is needed for locomotion and respiration.

Extracellular ATP (ATP) is also a signaling molecule. ATP, ADP, and adenosine are recognized by purinergic receptors which are abundantly present in mammalian systems.

Signaling role is important in CNS and peripheral nervous system (PNS). Activity-dependent release of ATP from synapses, axons, and glia activates purinergic membrane receptors known as P2. Unlike P2 receptors, ATP is not a strong agonist for Pı receptors. All adenosine receptors activate one sub-family of mitogen-activated protein kinases. The actions of adenosine are antagonistic or synergistic to the actions of ATP. In CNS, adenosine modulates neural development, neuron, and glial signaling and controls the immune system.

It is also important in intracellular signaling related to the signal transduction process. It is used by kinases as the source of phosphate groups in phosphate transfer reactions. The activity of kinases on substrates like proteins or membrane lipids constitutes common forms of signal transduction. Phosphorylation of a protein by a kinase can activate a cascade-like mitogen-activated protein kinase cascade.

It is also used by adenylate cyclase in G protein-coupled signal transduction pathways. It is converted to the second messenger cAMP involved in triggering calcium signals by the release of calcium from intracellular stores. This form of signal transduction is important in brain function and various other cellular processes.

DNA is a polymer of deoxy-ribonucleotides. The nucleotides are synthesized by the action of an enzyme ribonucleotide reductase (RNR) on corresponding ribonucleotides. Regulation of RNR and related enzymes maintain a balance of dNTPs relative to each other and relative to NTPs in the cell. Very low NTP concentration inhibits DNA synthesis and repair and is lethal to the cell. The abnormal ratio of d NTPs is mutagenic due to the increased possibility of the enzyme DNA polymerase incorporating the wrong dNTP during DNA synthesis. Regulation of differential specificity of RNR is suggested to be a mechanism for alterations in relative sizes of intracellular d NTP pools under cellular stress like hypoxine.

In the synthesis of nucleic acid RNA, adenosine derived from ATP is one of the four nucleotides which is incorporated directly into RNA molecules by the enzyme RNA polymerase. The energy driving this polymer comes from the breakdown of pyrophosphate (like ADP). The process is similar in DNA biosynthesis except for the fact that ATP is reduced to deoxy-ribonucleotide (d ATP) before incorporation into DNA.

Aminoacyl-t RNA synthetase enzymes utilize ATP as an energy source to attach a tRNA molecule to its specific amino acid, forming an aminoacyl-t RNA complex, ready for translation at ribosomes. The required energy is made available from hydrolysis of ATP to AMP by removal of two phosphate groups. Amino acid activation refers to the attachment of an amino acid to its transfer RNA (tRNA). Aminoacyl transferase binds ATP to the amino acid. In the process, two phosphate groups are released. Aminoacyl transferase binds AMP-amino acid to tRNA. AMP is used in this step.

Some proteins bind to ATP in a characteristic protein fold, called as Rossmann fold. It is a general nucleotide-binding structural domain that can also bind the coenzyme NAD. The most common ATP-binding proteins, known as kinases, share a small number of common folds. All protein kinases share common structural features specialized for ATP binding and phosphate transfer.