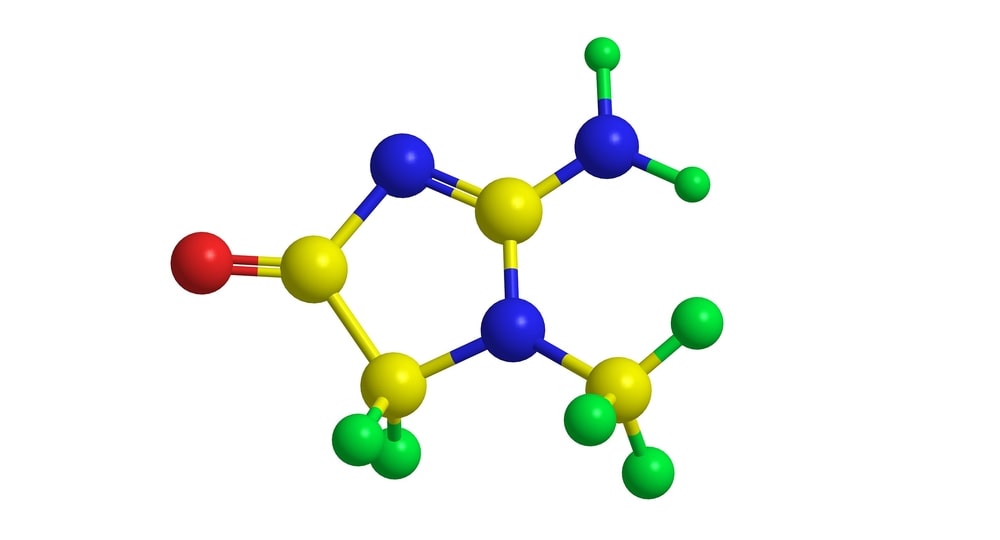 Phosphate salt of creatinine is present in the muscle. It is broken down to creatinine at a fairly constant rate depending on the muscle mass of the body. Serum creatinine is an important indicator of renal health. It is a byproduct of muscle metabolism and is excreted unchanged by the kidney. It is produced via a biological system involving creatine, creatine phosphate (also known as phosphocreatine), and adenosine triphosphate (ATP).

Creatinine phosphate is formed from three amino acids: arginine (Arg), glycine (Gly), and methionine (Met). It is synthesized by the formation of guanidinoacetate from Arg and Gly in the kidney followed by methylation to creatinine in the liver with the help of S-adenosyl methionine. It is further phosphorylated by creatinine kinase in presence of ATP to creatinine phosphate in muscle. Thus, it is synthesized in the liver and transported to muscle cells for storage via the bloodstream.

Creatinine is removed from the body by kidneys primarily by the process of glomerular filtration and proximal tubular secretion. A small amount of creatinine is absorbed by the process of tubular reabsorption. If filtration in the kidneys is deficient, then its level in blood starts rising. Hence, creatinine levels in blood and urine are used to calculate creatinine clearance (CrCl), which correlates approximately with the Glomerular Filtration Rate (GFR). Blood creatinine levels are used to calculate the estimated GFR (EGFR).

The GFR is clinically important because it is a measure of renal function. However, whenever there is severe renal dysfunction, the CrCl rate will be much more than that of GFR. Hypersecretion of creatinine by proximal tubules is the reason for a larger fraction of total creatinine. Keto-acids, Cimetidine, and Trimethoprim reduce creatinine tubular secretion leading to misinterpretation of GFR estimate.

An alternate estimation of renal function can be carried out by measurement of creatinine with that of Blood Urea Nitrogen (BUN). The ratio of BUN: creatinine can indicate other problems besides intrinsic behavior of kidneys e.g. raised BUN can be an indicator of depletion of volume.

Each day, 1-2% of muscle creatine is converted to creatinine. Men tend to have higher levels of creatinine than women because of higher skeletal mass. Increased dietary intake of creatine or consuming more protein can increase daily creatinine excretion.