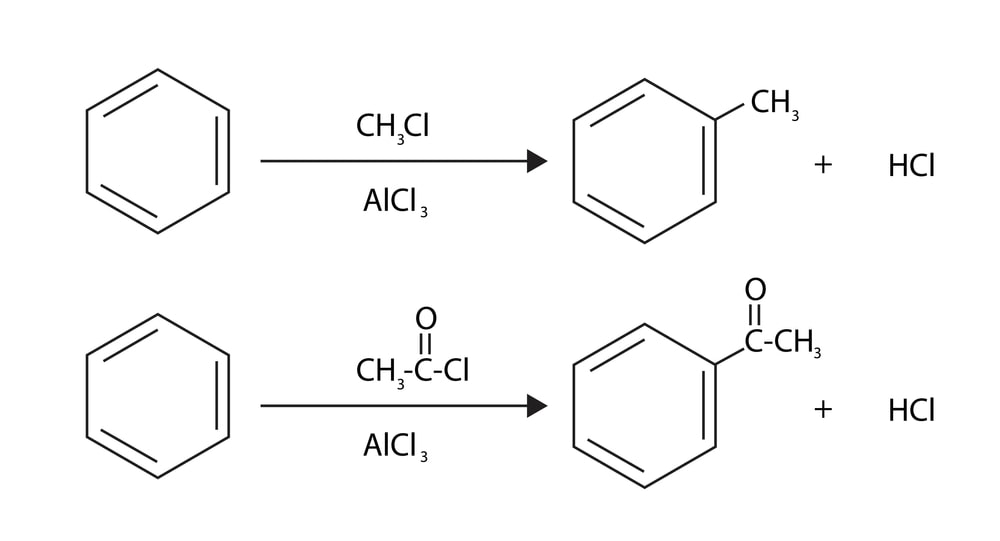 Friedel Crafts Alkylation: In 1877, C. Friedel and J. Craft showed that benzene and its homologs are capable of being alkylated by alkyl halides in the presence of anhydrous AlCl3. It involves the attack of either a free carbocation or a partially positive carbon atom on the electron-rich pi cloud of the benzene ring. In this reaction, an alkyl group is introduced into the benzene ring. When benzene is treated with an alkyl halide (R – X) in the presence of Lewis acid catalyst like anhydrous AlCl3, alkyl benzene is formed.

The carbon atom of the alkyl halide is a weak electrophile. The Lewis acid polarises or ionizes the C-X bond to generate an effective electrophile, R+ to promote the substitution. Other catalysts like FeX3, BF3, and HF can also be used. Hydrogen fluoride helps to polarise the halogen on the alkyl halide by forming a hydrogen bond between the two molecules.

The degree of polarisation depends upon the nature of the `R` prime group in alkyl halide and the Lewis acid used. The Lewis acids have the following order of effectiveness.

The less stable carbonium ions try to rearrange to more stable ones before they react with the aromatic ring. Rearrangement of the side chain may often occur after it is attached to the ring.

The 2-methyl-2-phenylbutane formed in the above reaction rearranges to 2-methyl-3 phenylbutane by the following mechanism:

The temperature has an effect on rearrangement. At low temperatures (0°C), the energy necessary for the rearrangement is not available. This yields the expected product in a major amount.

As alkenes and alcohols are capable of producing carbonium ions in an acidic medium, they can also be used for alkylation. BF3 may be used as the Lewis acid catalyst. Aromatic hydrocarbons can be alkylated by alcohol in the presence of sulphuric acid (as well as AICI, HF, P2OS, and H3PO4). When sulphuric acid is used, it is heated to 74-80°C and, while stirring, a mixture of aromatic hydrocarbon and alcohol is slowly poured in during the course of 3-5 hours.

The applicability of Friedel-Craft’s alkylation is limited because of the formation of a mixture of mono, di, and polysubstituted hydrocarbons. The desired product may also be dehydrogenated, hydrogenated, isomerized, and polymerized under the influence of AlCl3, thus reducing the yield and giving rise to problems in isolating the main product.